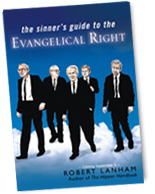 Just in time for the Rapture!

Praise for The Sinner's Guide to the Evangelical Right:

Like all great satire, the book is cerebral, irreverent and hilarious, while also edifying... Lanham keeps the humor sharp throughout.
— Publisher's Weekly

"Every good little liberal will have this book on order as a stocking stuffer come Jesus' birthday."
— Time Out

"A handbook for coping with bible thumpers.... When considering the power and influence evangelical Christians wield in this country, you have to laugh to keep from crying. Robert Lanham... understands this well and offers much needed, totally biased comic relief." — Village Voice

"This guy has written quite a funny book."
— Alan Colmes, Fox News

"Hilarious... go out and buy this book now."
— Sam Seder, The Majority Report

"Not only is this an important book, it's a funny book. If we are not careful and diligent it will be rewritten in a few years by someone other than Robert Lanham who will be in sinner's prison. It will no longer be a funny book and it will be called, 'Know Your Nation's Ruling Council in Christ'. Stop the Christo Fascist Zombie Brigade. Know who they are now with this book."
— Marc Maron, Host of The Marc Maron Show on Air America Radio

"This book should lay at the lifeless feet of your corpse as a silent, yet powerful and all encompassing explanation as to why you took your own life."
— David Cross, comedian and star of Arrested Development and Mr. Show

· 63% of Americans think the Bible is literally true.
· Lakewood Church meets in the former home of the Houston Rockets to accommodate their 30,000 regular attendees.
· Focus on the Family receives so much mail they have their own zip code.
· 79% of the 26.5 million evangelical voters supported Bush in the 2004 election.

Does reading these facts make your palms sweat? Do you often wonder when Christians became pro-business Wal-Mart shoppers? Does the word "family values" conjure up nightmarish images of Pat Robertson smacking the remote control out of your hand as he sheds dandruff flakes onto the upholstery of your sofa? Are you a sinner, but worry that the "righteous" have thrown the first stone?

If you answered yes to any of these questions, you may be suffering from a disease known as Evangophopia. The fear of evangelicals. But don't worry; it's more common than you think. Even some moderate evangelicals are developing symptoms. After all, the triumph of mall-sized megachurches with Taco Bells and rock-climbing walls inside them could test the faith of a dozen holy apostles.

If you think you may you have Evangophobia, the good news is that you're not alone. It's a downright pandemic. An estimated 98.6% of all non-evangelical Americans have symptoms.

Webster's Dictionary defines a phobia as an illogical fear. An irrational anxiety. Let's be clear; there's nothing irrational about being afraid of an army of evangelicals dressed in flag sweaters. Especially when they seem to be taking over America. We wouldn't be surprised if the Senate began filibustering in tongues. And if you don't get anxious when a four ton SUV passes you on the interstate with a bumper sticker that says WARNING: In case of rapture this vehicle will be unmanned, there's probably something wrong with you. Actor Stephen Baldwin, for God's sake, is the host of a traveling skateboarding ministry. He's been hanging out in parking lots of adult entertainment shops photographing patrons as part of an anti-porn campaign.

Given these facts, we sinners are in full agreement with evangelicals on one major point. The Apocalypse is drawing near. Evangophobia is normal. It's a healthy fear. And we're here to help.