The Subway Chronicles
To be published August 29, 2006
Penguin/Plume
Pre-Order the book

Your favorite authors weigh in on what riding the subway in New York City means to them. The Subway Chronicles book (Penguin/Plume) will feature 27 essays, including... Jonathan Lethem, Francine Prose, Calvin Trillin, Lawrence Block, Colson Whitehead, and Robert Lanham. 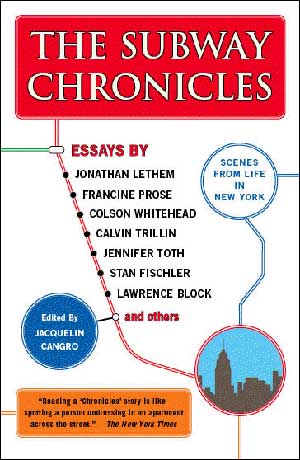 From Publisher's Weekly:
Here is a delightful collection of New York stories by veteran straphangers-both known and unknown-dedicated to that amazing underground network. Along with expected accounts of the unsavory run-ins with weirdoes and stink bombs during the usual subway commute (e.g., Daniels Parseliti's "Porno Man and I Versus the Feminist Avenger and Displaced Anger Man"), many of these authors offer poignant memories of riding the trains over the years, such as Jonathan Lethem's account of haunting the eponymous station in "Speak, Hoyt-Schermerhorn" as a white, liberal-middle-class kid immersed in a fringe area of crime and poverty. "Parnassus Underground" by Patrick Flynn recalls joyfully the meaty reading the author was able to accomplish during long workday commutes from the Bronx, before he moved and (to his literary despair) shortened his travel time. Robert Lanham's "Straphanger Doppelgänger" records the chilling encounter between two commuters of uncanny resemblance who have observed each other over a long period. Most gratifying are the historical details worked into many of the essays, such as the comparison between Russian and New York underground railroads as noted by Boris Fishman in "Metro Blues, or How I Came to America." This is a clever collection gathered by Cangro from her Web site, thesubwaychronicles.com.